I haven’t posted on my SQL Server blog for a few weeks, I missed the August T-SQL Tuesday which I’m a little annoyed  about but I have been very busy at work with my clients and very busy at home too. This is just a short post to dust of the blog. I have a post or two lined up that will hopefully be published before the end of August and then I hope to get back into full swing when Autumn arrives come September.

Some of you may know that I have two young Golden Retriever dogs, they are just over a year old. On this Thursday gone my wife and I took my dogs to the lake not too far from our house, my one dog Jake loves the water when I throw a tennis ball in he’ll swim and get it. Seth so far has been less of a swimmer, he prefers to paddle close to the shore. Well we wanted to get him to swim so we held Jake on his lead and threw the ball in for Seth, not to far, a few yards from the shore, but out his depth so he would have to swim to get it. He was a little cautious at first but he did try to get it and made it out where the ball was floating, when he turned around to come back it looked like he was trying to swim back but he wasn’t moving or making any distance, after a few seconds his brother Jake started to become a little upset, so I took his lead off and he jumped straight in help his brother, he couldn’t do much though so I had to go in and get him!!!

I waded in fully clothed, my wife managed to take a photo as I climbed out: 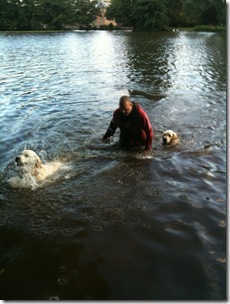 It turns out he just wasn’t kicking with his back legs so was treading water with his front paws. When I lifted him up he started kicking his back legs and swam to the shore leaving me and his brother Jake, behind. He wasn’t fazed or upset that was just me, he never let the ball go in all that time and when he got back to the shore  Lisa threw the ball  back in the lake and he jumped straight back in swam properly. I’m not sure if he was in trouble or was just playing with me, or perhaps he just needed the confidence that I would be there for him if he needed me but Judging by the smile on his face in the photo as he swims back to shore I like to think he was teasing me. I now have two dogs that love the water and a funny photo of the day I ended up in the lake!