SQL Server 2016 RTM – Is Anyone Still Waiting for the First Service Pack?

Well most of the SQL Server news last week focused around the launch of SQL Server 2016. SQL Server RTM dropped on 1st June and a quick twitter poll, suggests that some  people at least will be deploying SQL Server 2016 in production before the end of the year. 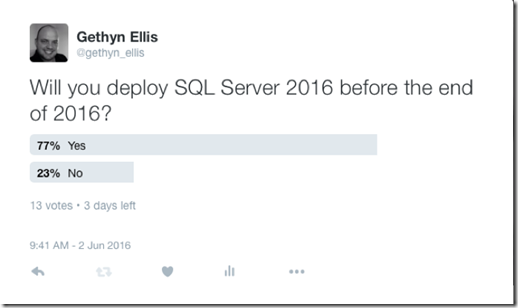 These findings, granted on a very small sample, imply that least some people will be deploying SQL Server 2016 in the next six months. I still hear some people say, that they will wait for the first service pack of new SQL Server release  before looking to deploy and migrate their production datatbases to the latest SQL Server release.

Back in the day, probably SQL Server 2000/2005, possibly even later than that with SQL Server 2008,  I generally recommended waiting for the release of the first service pack, mainly because SP1 usually fixed all the bugs that was included in the RTM version, things howver have moved on since then.

These days having the first service pack mentality is probably slightly backward thinking.  Microsoft has the Technology Adoption Program (TAP) and Rapid Deployment Program   (RDP) you can read more about these on James Serra’s blog  but basically these initiatives provide Microsoft with early feedback on new product and the product goes through more rigorious testing than in years past. The RTM version of SQL Server has been thoroughly tested before release and most of the bugs should have been caught before RTM.

Microsoft’s attitude to service packs is changing or maybe has changed already. For example with Windows Server 2012 they introduced the concept of update rollups. Instead of service packs they release regular/frequent updates. These are explained in this blog post https://blogs.technet.microsoft.com/askpfeplat/2013/05/13/update-rollups-for-windows-server-2012-and-windows-8-explained/ so with the old “wait for SP1 mentality” You’ll still be on Windows Server 2008R2.

From a SQL Server perspective the landscape is also changing. Back in March Microsoft announced the SQL Server Incremental Servicing Model (ISM) in the following blog https://blogs.msdn.microsoft.com/sqlreleaseservices/announcing-updates-to-the-sql-server-incremental-servicing-model-ism/ which basically means instead of installing cumulative updates (CU) if they fixed a problem you were experiencing with SQL Server Microsoft  now want you to apply CUs regularly and proactively, the reason for this as quoted from the ISM blog post is “This is because CU’s are certified and tested to the level of SP’s”. With this in mind you have to question how frequently there will be a service pack release for SQL Server 2016, if ever. It might be that service packs are a thing of the past. So if you wait for SP1 before deploying SQL Server 2016 then you might have a long wait.