At the end of March I wrote a couple of posts discussing the state of IT industry. It looked at how government changes to dividend tax and possibly the Brexit vote last year seemed to have an impact on small business creation in the UK in the period running from February 2016 through to June 2016. A correlation between these two events and decrease in the number of IT companies being created is evident. As someone took the time to point out in a comment, correlation does not mean causation. Thank you for the comment.

The tax changes and the Brexit vote last year coincided with a decrease in the number if IT companies being created and registered at Companies House.

Back to this year, March 2017 has seen a budget, which announced further change to dividend tax. More importantly March 2017 also saw the triggering of “Article 50” Britain has given notice that it intends leave the European Union and formal negotiations of that departure can begin. In April the new tax year kicks in and with it some significant changes to public sector organisations and how they use contractor. Its involves a change to something called IR35 – which is basically a rule/law that stipulates if you are in business on your own right or in fact if you are caught inside this rule you are in fact a disguised employee. It is now up to the engaging organisation in the public sector to decide whether or not the contracting organisation is inside or outside IR35.  It seems, from what I have read on varies contractor sites and LinkedIn that several large government departments have made the sweeping catch all decision to say that all contractors they engage with are inside IR35. They are in fact (disguised) employees. They seem to be applying this as a blanket and using HMRC guidance and guidelines to make a decision. This in turn has an impact on the contracting organisation and in fact how they go about paying their tax. To say its complicated is an understatement and I’ve only really scratched the surface here. Needless to say public contractors are not happy about it. I’m not sure if in fact the public sector bodies are happy about it. A source of mine suggests that many contractors in government departments have decided this not acceptable and ‘walked with their feet.’ My source said, “It’s a problem for senior management.”

Interesting times. If you are a contractor that has been engaged in public sector contract and been affected by this I would be interested in hearing your thoughts…Feel free to leave a comment or if you prefer message me privately using the contact form.

All of the above factors, some of them major decisions, will likely influence IT company creation, influence whether someone takes the plunge and start their own business here in the UK.

Being a SQL Server and a data person I was keen to explore the data and see what it shows.

Companies house updates its publicly available data set within 5 working days of the end of each month. The updates for the end of March was available for download on the data.gov.uk site this morning. I downloaded it and loaded it into SQL Server databases to analyse it.

I imported the query into Power BI and filtered on years and months to the first three months of each year for the last four years. I got the following graph 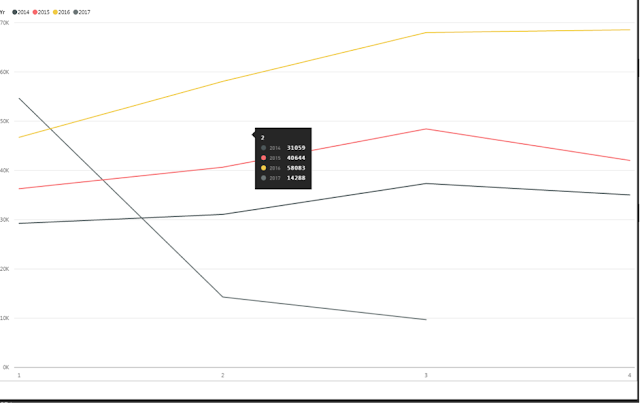 I’m aware that the screen grab is not clear 2017 is the line trending downwards. In 2017 new company formation is down quite considerable on previous years.

I then tweaked my query to look specifically at new IT companies created. I was interested if it followed a similar trend.

I had to change my query quite a bit to get the results for IT companies created in March. When I added the filter (WHERE clause) to capture only IT companies to my query I didn’t get any rows/counts returned for March…Interesting 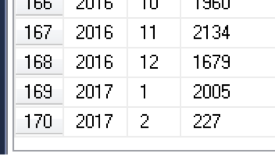 Intriguing – could it be that there were in fact no IT companies created in March and my group by meant that the March 2017 group had been excluded from the results?

I changed my query to use of a CTE and made a change to my group by clause to a GROUP BY ALL.  GROUP BY ALL differs from GROUP BY and the SQL Server documentation best describes the differences

“If you use ALL, the query results include all groups produced by the GROUP BY clause, even if some of the groups have no rows that meet the search conditions. Without ALL, a SELECT statement that includes GROUP BY does not show groups for which no rows qualify.”

My new query is

According to the current data there were no IT companies created in March!
Lets look at the first 3 month or of 2017 and compare with recent years in graph form 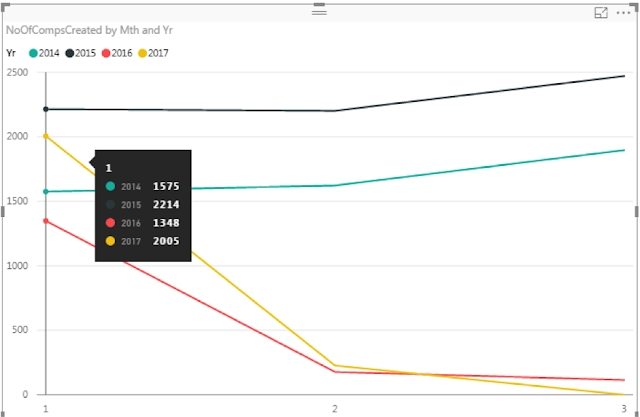 The figures and graph are intriguing from an IT company perspective 2017 is following a similar pattern to 2016 – I don’t know if the Companies House data set is complete and includes all the data for March yet. I assume it does but I will also check this out as future data is made available. It seems for now though nobody wants to start  an IT business!