SOS - Save Our Souls or SQL Operations Manager

On Wednesday Microsoft Announced the release in preview of SQL Operations Studio (SOS)... What is that I hear you cry! Well I asked myself the same question and did some digging. 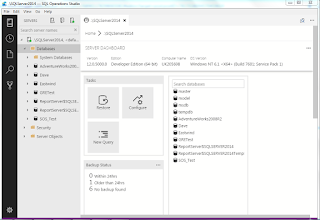 SQL Operations Studio a client tool for working with SQL Server... It was announced at the PASS summit last week and it hit public preview on Wednesday.

"ARE THEY GETTING RID OF MANAGEMENT STUDIO?????" I hear you scream, well  that was my initial thought too.

Fear not though, Management Studio is hear to stay, at least for now, according to this interview  in visual studio magazine of Microsoft executive  Rohan Kumar.

Q: Will this tool replace SSMS?
A: It is not in our roadmap.

It's not a No. So not necessarily conclusive. "It is not in our roadmap" - I keep adding a "yet" to the end of that sentence. Road-maps do change overtime but I think we can assume that SQL Operations Manager will be around for a while yet.

You can run SQL Operations Studio  on Linux, Mac OS and Windows - Management Studio  only  runs on Windows.

I have heard SQL Operations Manager being  described as SSMS lite - I have also heard and seen questions asked on social media such as, "is SQL Operations Manager for Devs?" The official answer according to the interview is  "it's for Developers and Ops"
Hmmm Dev Ops maybe? - everybody's favourite buzz word at the moment.

From the quick look around SOS I have managed to squeeze in this week it has a different look and feel to Management Studio.

Anyway we'll have a look at SQL Operations Studio in a  more detail and report back in a few other posts and maybe a video
By Unknown - November 17, 2017