It’s been an interesting week here at gethynellis.com. We have been busy with a SQL Server version upgrade for a customer, the new solution combining Always On Availability Groups and merge replication. We have also been helping a customer with some on premises  SQL Server builds,  creating a new pre-production environment. Fun times - its good to know on premises is still a thing. It’s the news this week that has been most interesting.

Thursday this week was an unusual and difficult  day for users of the O2 phone network. It seems that in the early hours of Thursday morning something fundamental in the O2 network broke. Meaning that some 25 million people (I have seen this quoted as being as high as 30 million, which include other suppliers who utilise the O2 infrastructure.)  had no access to data on their phones. How did people cope? It’s back up and running as of Friday morning, Software and a third party suppliers are being blamed along with an expired certificate. 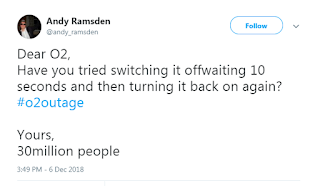 If it did nothing else, the O2 outage further highlighted how dependent people have become on using their smart phones and having internet access in particular. O2 have mentioned compensating customers for the outage, I haven’t seen any details on how that will work but it will be interesting to see how that materialises.

Affecting Starwood hotels... The following is an extract from an email I have received from Marriott telling me about a Starwood hotels data breach. I have stayed in  Marriott hotels on many occasions. I don't recall staying in a Starwood hotel however the fact I'm getting this email must mean my details are in their databases...Worrying!

"On September 8, 2018 an alert was received from an internal security tool regarding an attempt to access the guest reservation database...Security experts were engaged to help determine what occurred.  We learned during the investigation that there had been unauthorized access to the Starwood network since 2014. Marriott recently discovered that an unauthorized party had copied and encrypted information, and took steps towards removing it. On November 19, 2018, Marriott was able to decrypt the information and determined that the contents were from the Starwood guest reservation database and determined that the contents were from the Starwood guest reservation database.
The information includes some combination of name, mailing address, phone number, email address, passport number, Starwood Preferred Guest ("SPG") account information, date of birth, gender, arrival and departure information, reservation date, and communication preferences. For some, the information also includes payment card numbers and payment card expiration dates, but the payment card numbers were encrypted using Advanced Encryption Standard encryption (AES-128). There are two components needed to decrypt the payment card numbers, and at this point, Marriott has not been able to rule out the possibility that both were taken. For the remaining guests, the information was limited to name and sometimes other data such as mailing address, email address, or other information."


So someone has been rumbling around in this database for four years without anybody noticing, with access to a plethora of data including in some cases credit card information ...Oh dear! I suspect this will not be last the last we hear of this.

You can't round up this week without mentioning Brexit.  Let’s not talk about politics for too long or we’ll all get depressed, but it’s been an interesting  and possibly a slightly worrying week as Teresa May attempts to sell "The Deal" to MPs. (It doesn't feel like a great deal to me).

Every day in parliament this week has been the most important day in parliament’s history since... well the previous day. There is no doubt a long way to go before we get anywhere near a solution to the Brexit problem. Although if the "meaningful vote" is defeated on Tuesday next week, assuming the vote happens and is not delayed we might heading for a new Prime Minister or even another general election all before Christmas.

Interesting Times...I wonder what fun next week will bring.